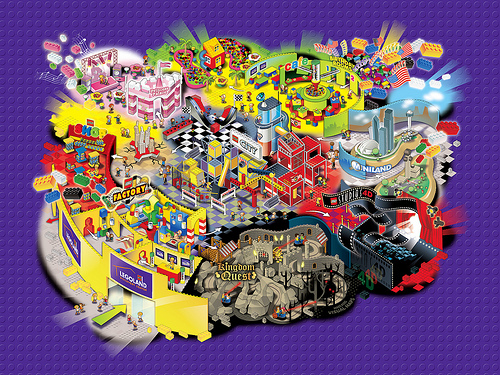 I recently had the opportunity of visiting the Legoland Discovery Center in Grapevine, TX with my family. Needless to say we all loved it and had a blast! Here are a few highlights and details about it. Make sure you read all the way to the end for a change to win a 4 ticket pack to have your own adventure at Legoland!

The new Legoland Discovery Center in Texas features rides, movies, and many LEGO models, but in a smaller space than a LEGOLAND theme park. Of course, this smaller space is still rather large and it’s indoors, which means no lines under the crazy Texas weather! 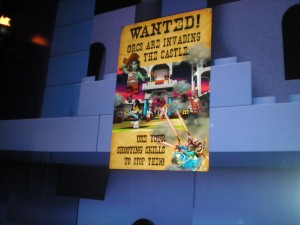 Kingdom Quest is an interactive laser ride, in which guests join the Good King’s army, climbing aboard a chariot for a battle against the evil skeletons and giant trolls. My son liked this one so much he wanted to ride it again, but it is a one time ride.

Similar to what you would find at Legoland Theme Parks are MINILAND, LEGO City, DUPLO Village, and an Earthquake zone, though the specific details, decorations, and features found in Texas differ greatly. Keep in mind Discovery Centers are mini version of the Theme Parks. 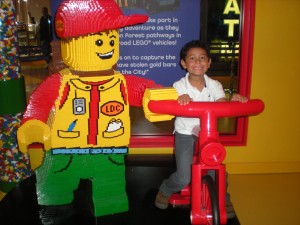 LEGO Studios: 4D Cinema is home to 3D movies plus an additional in-theater dimension full of wind, rain, lightning, snow and other surprise features. Movies shown here include Bob the Builder 4D, Spellbreaker 4D, and LEGO City: A Clutch Powers 4D Adventure. We watched both Spellbreaker and Clutch Powers, I couldn’t get my son to go watch Bob the Builder, because in his own words: “Well mommy, I am not a baby anymore!” 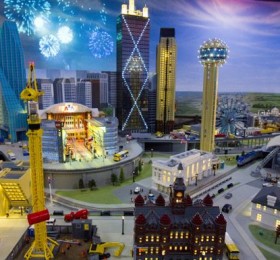 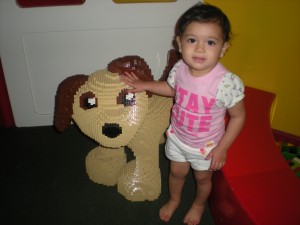 DUPLO Village is where the smallest LEGO fans can safely play with large bricks. We all had a ton of fun at this one. We also discover Karyme (our daughter) has quite a throw, as she was attacking her brother.

Merlin’s magical potion room is where guests can ride Merlin’s Apprentice, on which they will go round and round, while pedaling, the faster you pedal the higher it’ll go.

The Build & Test zone allows guests to build and race cars, timing them to the hundredths of a second. Both my husband and son spent a long time here, perfecting their race cars and taking them through all the available ramps. 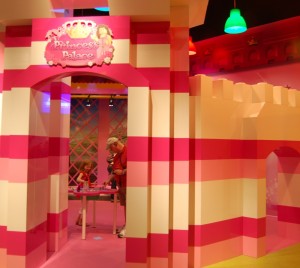 While they were racing cars, Karyme and I were at the LEGO Princess Parlor featuring tall towers, colorful pink rooftops and elegant arches. It had 3 tables with girly color legos and a karaoke stage with 2 screens with lyrics.

These are just a few highlights of the many activities, exhibits, and areas within the LEGOLAND Discovery Center. And, of course, there are plenty LEGO bricks, kits, and even exclusive collectibles to purchase and take home.

Guests can easily make a day of the LEGOLAND Discovery Center, even dining in the LEGO Café, featuring tea, coffee, snacks, full hot and cold meals. You can get out and come back later too, just make sure they stamp you. 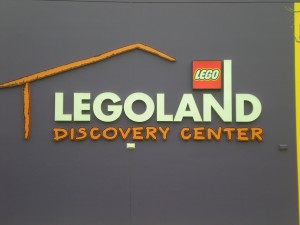 LEGOLAND Discovery Center is located at the Grapevine Mills Mall. More information, including ticketing, can be found on their web site.

Last but not least, the wonderful folks from LEGOLAND Discovery Center are giving Austin Couponing a Family Pack (4 tickets) for a lucky reader to come visit their awesome Center! To enter just click on the “ENTER NOW” image below.

Also, leave me a comment telling me if you like Legos and why. And I will add a Lego surprise if you are selected! 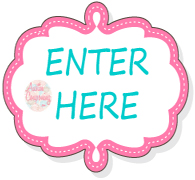 17 thoughts on “Legoland Review and Giveaway!!!”