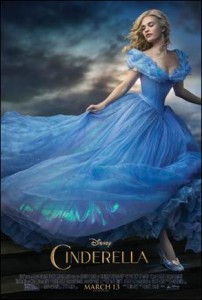 I first heard about the new live action Cinderella movie from the Christian Loubouitin ad. Honestly I was dumbfounded Cinderella has always been one of my favorite movies and although I was sure Disney would do it justice, I know we live in a completely different era than the one when the animated film came out. Also, a leap from animation into live action isn’t always smooth nor successful.

This week, I had the opportunity to see the live action version of Cinderella at an advanced press screening. I thought the re-telling of the classic fairy tale was done beautifully. I really appreciated the time spent on Ella’s background and the character development, specially the time spent getting to know her mother. The film did not shy away from the emotional turmoils in Cinderella’s childhood, and kept her mothers memory very much alive through her message to have courage and to be kind.

Lily James and Richard Madden are real life royalty, they are both immensely gorgeous and the dance sequence was magical and amazing. I was a bit wary about that specific scene since it’s so meaningful to the film but once again Disney has proven to they can make everything amazing!

Helena Bonham Carter is a beautiful and ever so clumsy fairy godmother and her rendition of Bibbidi-Bobbidi-Boo through the elegant orchestra score took me way back to my childhood, to a time when I though I was also a Disney princess. If you are curious about a bonus after the credits, there isn’t one; but I suggest hanging around for the credits to hear Helen Bonham Carter’s rendition of Bibbidi-Bobbidi-Boo which is also included on the soundtrack. Oh! and the new version of a Dream is a wish your heart makes is tear worthy. Perhaps I just have a strong bond to Cinderella

I was super excited about the new short Frozen Fever! And let me tell you it did not disappoint. I am sure there will be a fair percentage of movie goers who are just headed out to see Cinderella for the new Frozen Fever short that is attached. It was super funny and in true Disney short fashion it delivered a lot more than expected. The new song, Making Today a Perfect Day, with Anna & Elsa was very cute and I’m sure will be a huge hit with little girls.

Disclamer: I was given free Press Passes to watch the film, I was not compensated to write the review or watch the movie. All opinions are my own.